Climate refugees on American soil, Italy’s fake news, the Bad Sex Awards, and what do you feed the Standing Rock protestors?

Sign up for R&K Insider, our collection of the most compelling happenings in food, politics, and travel from across the web.

This week, I was captivated by these images of a remote U.S. town on the Bering Sea that is slowly sinking into a bog due to climate change. I often think of warm-water Pacific islands as ground zero of the climate change crisis, but people living in the Arctic—in this town, mostly members of the Yupik indigenous group—are attempting to relocate to higher ground, but the endeavor has been fraught with “logistical challenges and limited funds.”

This is all happening in a state that has seen an explosion in oil profits during the last nearly half century since the construction of the trans-Alaska oil pipeline in 1974. It’s as though this boom in oil production has helped some people while contributing to a climate crisis that has left others with basically nothing. Huh! Now, if you will, let’s move from Alaska to the rolling plains of North Dakota, where, as you may know, thousands of protesters have gathered in an effort to halt or at least change the course of the Dakota Access Pipeline (DAPL), which encroaches on sacred tribal grounds and which some experts warn could contaminate drinking water. Recently, both the U.S. Army Corps of Engineers and North Dakota Governor Jack Dalrymple have ordered the camp to close; thousands of U.S. veterans are traveling to the protest site to “protect the protesters,” as well as raise awareness and bring supplies. Apparently it’s easier for some people to get there than others. If you’d like to catch up on what’s happening, here’s a fascinating piece on the historical underpinnings of the conflict, which sounds boring, but it’s not! It’s about George Washington and Wounded Knee and treaty theory and America’s Last Chance Saloon. But what do you feed the Standing Rock protestors, quinoa or lung soup? And apparently it needs to be said that Standing Rock isn’t goddamn Burning Man. Lots will be happening in North Dakota this weekend, a phrase entirely new to the world.

More good news: there’s a man in Germany nicknamed “Dr. Flirt” and he’s helping refugee men from Muslim countries integrate into German society by learning how to hit on German women. Some real money quotes there. Speaking of refugees, here’s a fantastic, in-depth profile of a family journeying from Damascus to Sweden. And for more #longreads, don’t miss this jaw-dropping exploration of how Italy is the next battleground in the fake news wars. China’s new “social credit” rating system is less fun to read about when it’s not part of a dystopian YA novel. Yeah, what WOULD Leibniz say about schisms in Europe today? And we found the cheapest flight to Mars; it leaves from a tiny Indian island. 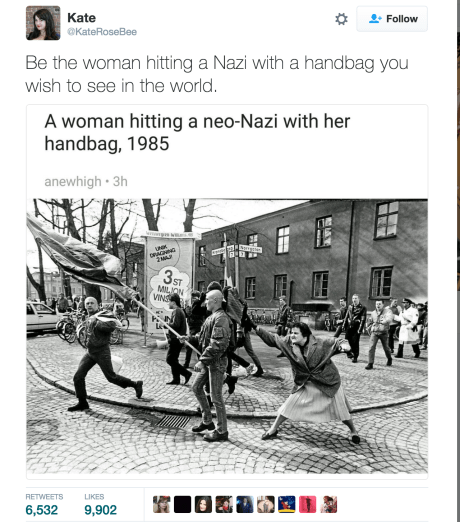 g today in the first election to seriously threaten more than two decades of President Yahya Jammeh’s rule, and the internet and international calls have been banned in the lead up. Oh and Austrian voters might elect a fascist president this weekend. Feeling weird about democracy right now? That’s ok, it won’t be around for much longer.

Be the woman hitting a Nazi with a handbag you wish to see in the world. pic.twitter.com/nMb7iq8ZBB

This article sure is an eye opener! That is, if you’ve literally never considered that some people have different experiences and perspectives than you do. This is one of those moments I want to say, c’mon, it’s 2016, and then I remember what’s happening in the world and think, oh right, it’s 2016. Not worried about drones? You will be after you see the prototype for a drone that delivers ingredients to your house while you watch a cooking show. I wait for the bad sex writing awards all year. It must have been a hard decision this year. Rock hard. And finally, I don’t think I ever got to share my favorite video of all time with you, friends. It has brought me great strength, and I hope it does the same for you.

Join our newsletter to get exclusives on where our correspondents travel, what they eat, where they stay. Free to sign up.

Join our newsletter to get exclusives on where our correspondents travel, what they eat, where they stay. Free to sign up.